I have always had a hard time standing on ladder rungs. I don’t mind painting the house, but when it comes to standing on the ladder for a long time, my feet hurt too much. We’re shopping for a a Little Giant Ladder because you can actually turn it into scaffolding! So when I paint, I’m standing on a flat board rather than a ladder rung. 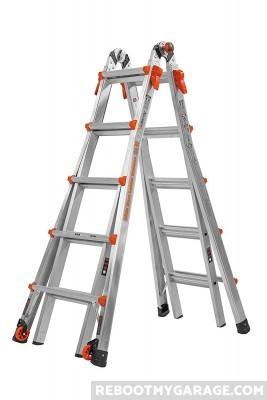 Besides, our neighbors love theirs.

We currently have two step ladders and an extension ladder.  The most popular kinds of ladders are

Which ladder you get depends on how high you need to go, and if you want the combination ladder special features.

An extension ladder is made of two or three sections. You slide the extra sections  to lengthen the ladder, then slide them back to shorten it. Extension ladders run from 32 ft. to 72 ft. long, depending on the model. To use an extension ladder, you lean it against a tall structure. The ladder cannot stand on its own.

Safety is important on all ladders, and especially so when climbing tall heights. Here’s a good tutorial on how to use an extension ladder. 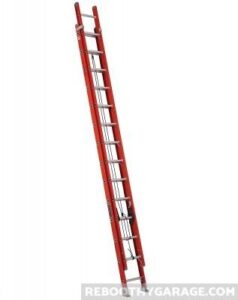 Extension ladders are usually made from aluminum or fiberglass. Because you might find a gutter in your way, you can add “stand off arms” (also called “stabilizers”) to the extension ladder which will move the ladder load from the edge of the roof to the roof itself. You can also use a stabilizer when the ladder leans against a vertical surface to move where the ladder weight meets the structure it’s leaning on. 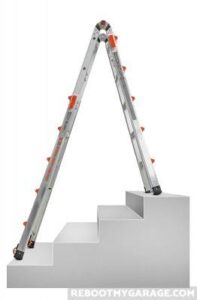 An articulated multi-use ladder has multiple hinges and locks that allow you to change its shape into useful configurations. Use an articulated ladder as a step ladder; as an extension ladder (lean it on a building);  and as a scaffold. Configure it to work on stairs or to reach heights. It’s really an amazing piece of engineering. Little Giant popularized this type of ladder and they still own the top ratings for quality and customer satisfaction. One excellent example is the Little Giant 22-Velocity 15422-001 reaches 22 ft. high and comes with wheels so you don’t have to carry all of its weight (which is 39 lb.).

How to Buy These Ladders

These links open in a new browser window at Amazon 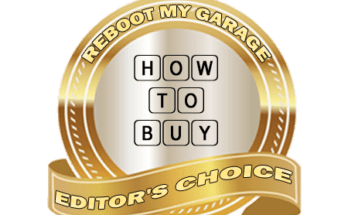 The Best Way to Start-Off Your Rubbermaid FastTrack Storage

We are on a mission to learn the best ways to organize our garage. This site is focused on helping you along your garage recovery journey. We just want to be as helpful as possible because it really is a joy to get your garage back!